Did Edward Morgan ever dream. when he was a student at Sam Houston High School, that he would one day appear in his home town as a member of the Joffrey Ballet, featured in one of the company’s signature works?

Perhaps not, but the 22-year-old San Antonio native has long had a special feeling for that company. I’d always wanted to go with the Joffrey.” explained Morgan in a recent telephone interview from the company’s studios in New York, “because, for my birthday one year, my mother gave me a season ticket to see the Joffrey in San Antonio. and that’s reallv how I got interested in dance.

His fascination with the art dates back even further, because he remembers as a child watching local and television dance programs, and he was “always dancing.”

He was active in the drama club in high school, and staged a production of “Jesus Christ Superstar.”
“I didn’t have any training, but I would enter the talent shows and things like that. Then my mother said Since you’re so interested, why don’t you study formally?”

He began taking class with Patricia Delleney at Ballet Arts School, and recalls his work with her as a good beginning. Since he was the only boy in the class, he had plenty of opportunity to work by himself, and Delleney encouraged him.

After two years training here, Edward moved on to Dallas, where he was a member of Dallas Metropolitan Ballet under Ann Etgen and Bill Atkinson. At a regional ballet festival, Robert Joffrey spotted him, and he was offered a scholarship to the Joffrey School. He later returned to San Antonio to participate in a Joffrey Workshop at Incarnate Word College, and from there, he entered Joffrey II, the “junior company” that is a proving ground for the main company.

Joffrey Il provides experience not only for young dancers, but for new choreographers as well. Morgan recalls one of his favorite works as “Unfolding.” choreographed especially for him by Grey Veredon of the Cologne Ballet. (Local audiences may remember Veredon’s work, “Chase,” which he set on the San Antonio Ballet Company in 1979.) Other works
Edward enjoyed were Darrell Grey’s “Ladder for Escape” and Marjorie Mussman’s “Random Dances, which was performed here by the Joffrey in 1980.

Since joining the main company in October, Morgan has inherited Christian Holder’s role in “Trinity,” the rock ballet of the 1960s that is something of a Joffrey trademark. He will appear in that ballet on opening night next Tuesday.

Morgan has enjoyed working with the ballet’s choreographer, Gerald Arpino. “He really knows how to pull your personality out and get it into a piece,” he said, “whereas a lot of choreographers feel it has to be the same every time someone different does it.” Edward is currently learning another Arpino work, Christian Holder’s solo “Touch Me,” of which he said *It’s hard work, but it’s fun.”

In addition to his role in “Trinity, Morgan will appear as a member of the corps in Friday and Saturday’s performances of “Taming of the Shrew.” Although he had a little taste of teaching and choreographing on nis own while in Dallas, working with the Dallas Black Dance Theater, he is delighted for now to be a part of the company he calls “a great big family.” “Everyone’s nice. Edward said, “The classes are great the teachers – the choreography working with everyone is just 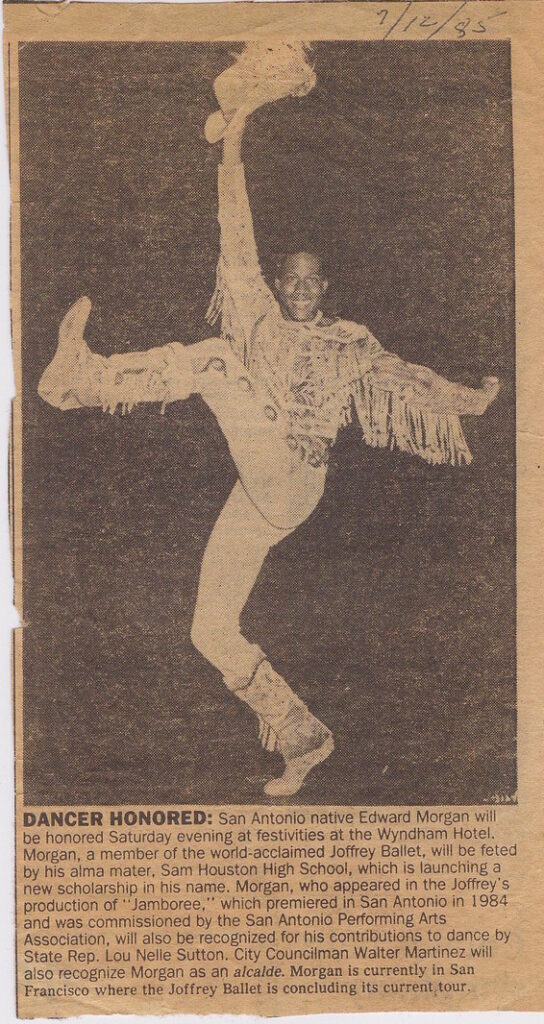 DANCER HONORED: San Antonio native Edward Morgan will be honored Saturday evening at festivities at the Wyndham Hotel. Morgan, a member of the world-acclaimed Joffrey Ballet, will be feted by his alma mater, Sam Houston High School, which is launching a new scholarship in his name. Morgan, who appeared in the Joffrey’s production of Jamboree, which premiered in San Antonio in 1984 and was commissioned by the San Antonio Performing Arts Association, will also be recognized for his contributions to dance by State Rep. Lou Nelle Sutton. City Councilman Walter Martinez will also recognize Morgan as an alcalde. Morgan is currently in San Francisco where the Joffrey Ballet is concluding its current tour.