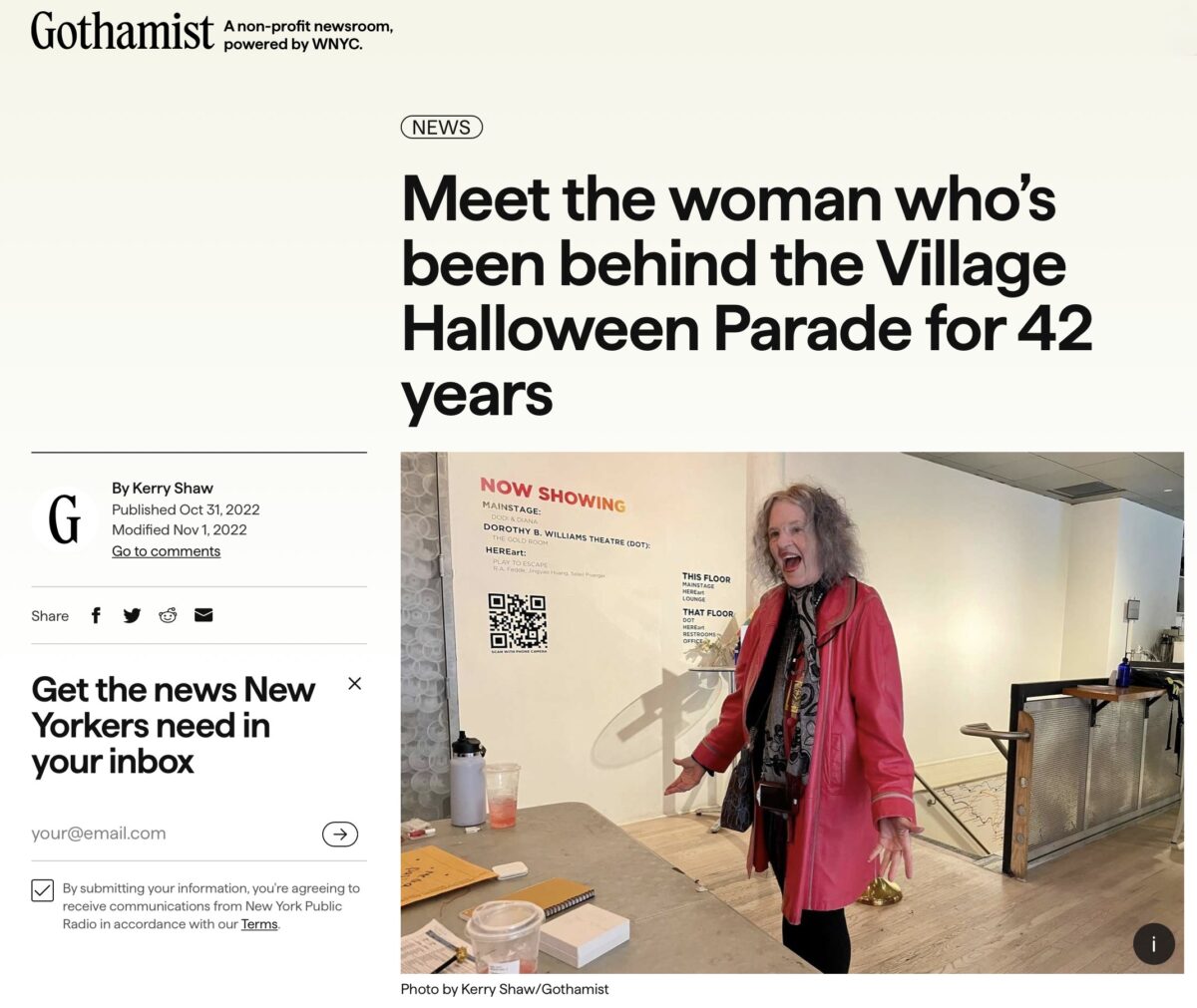 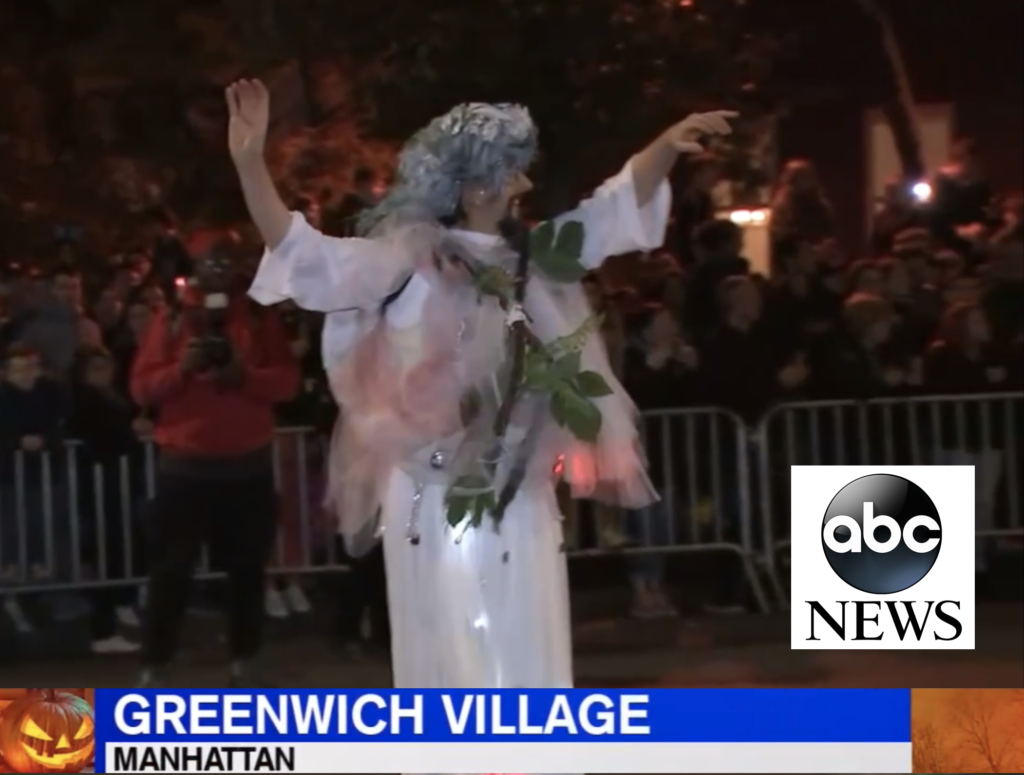 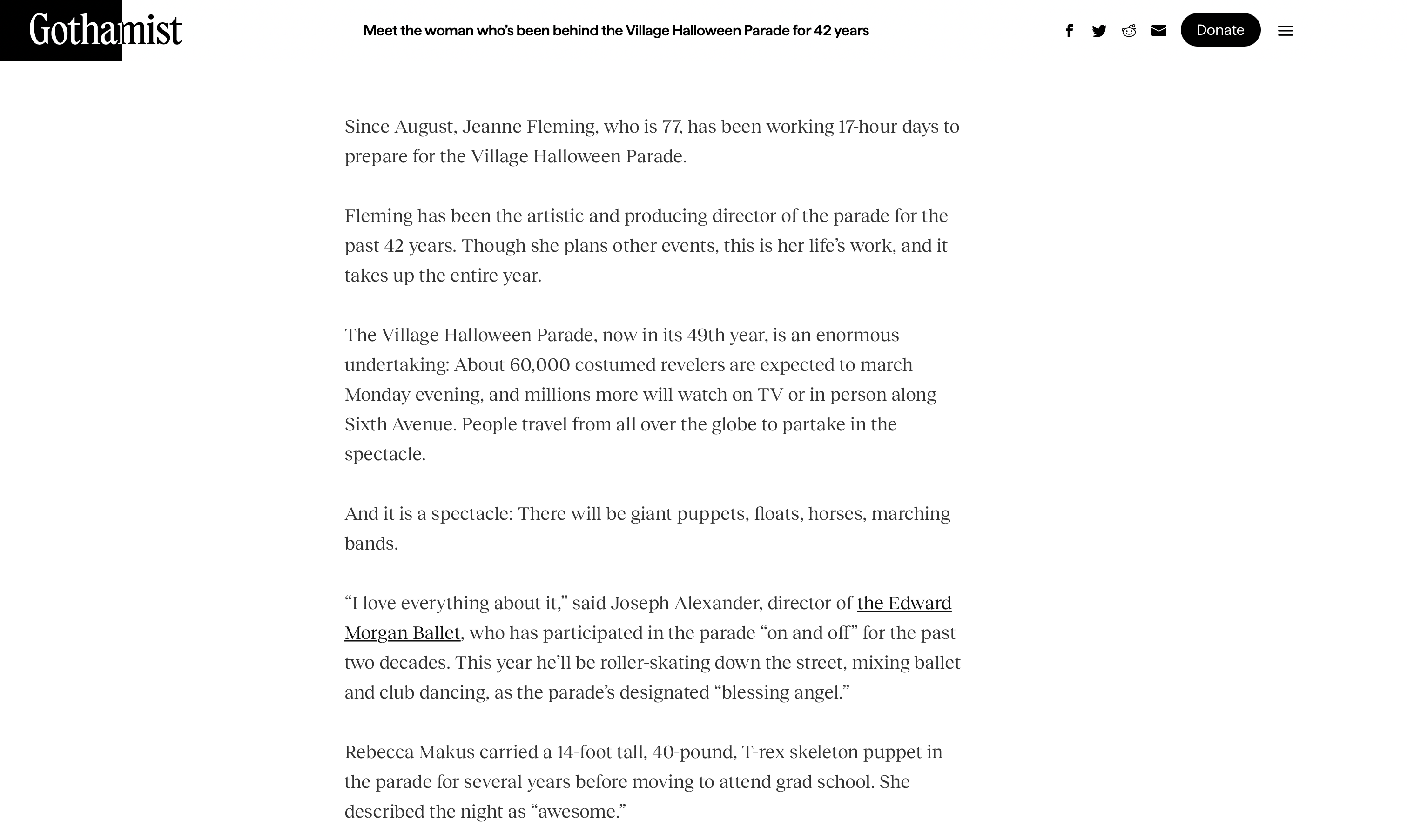 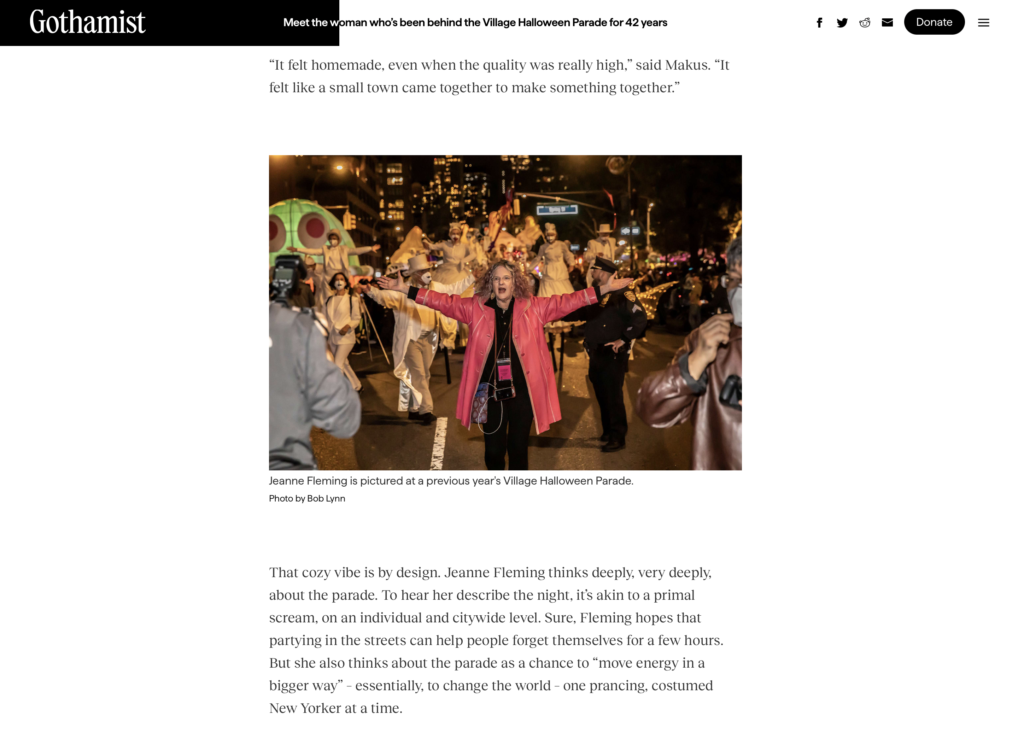 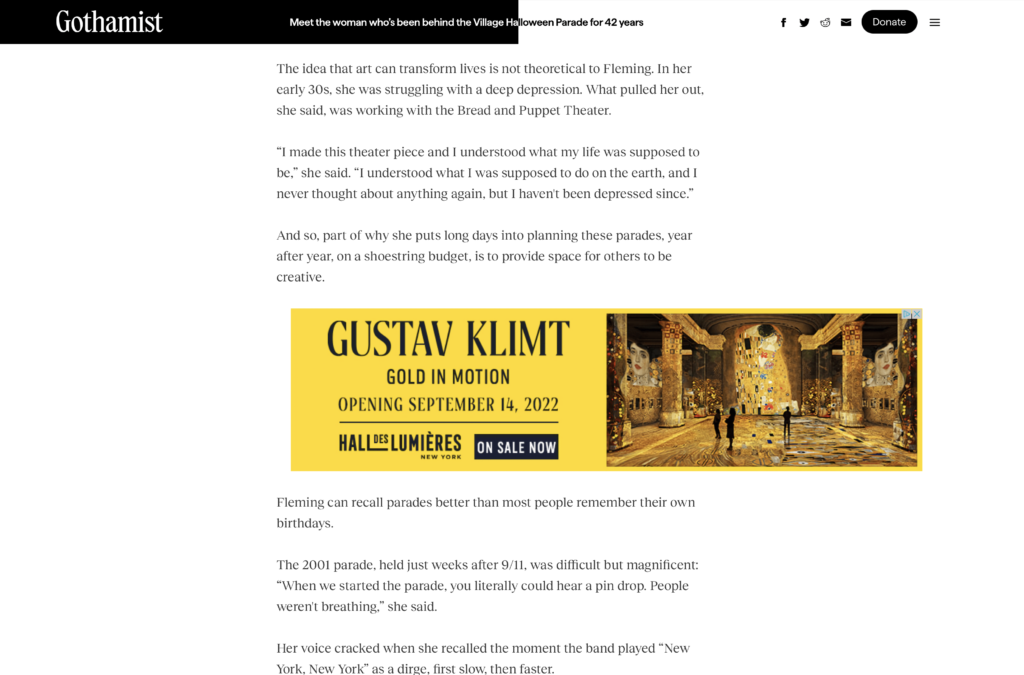 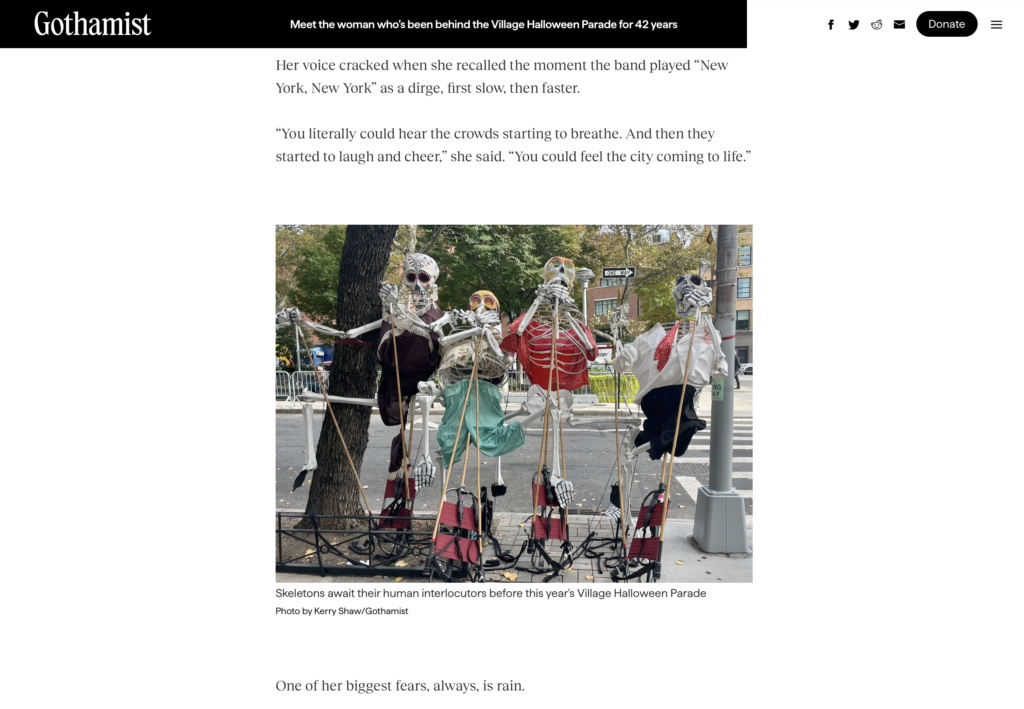 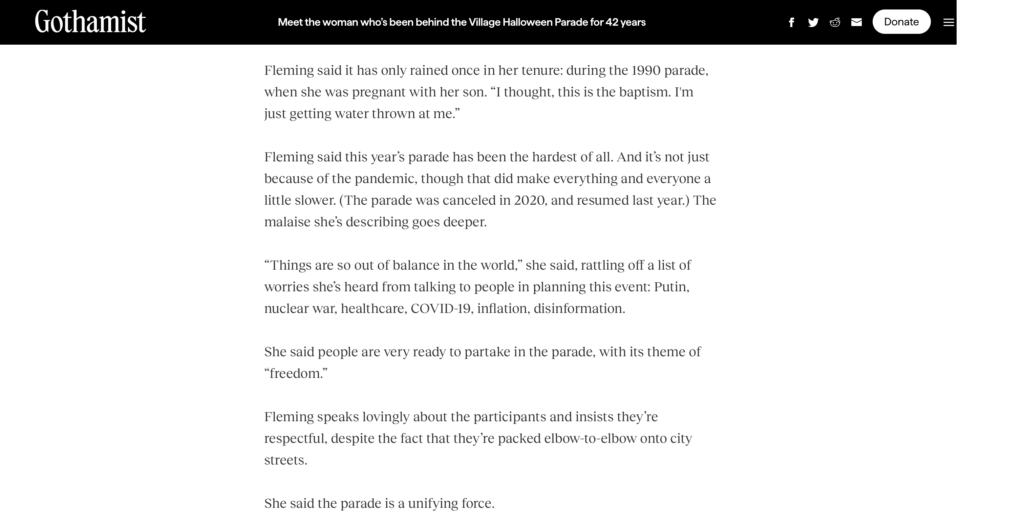 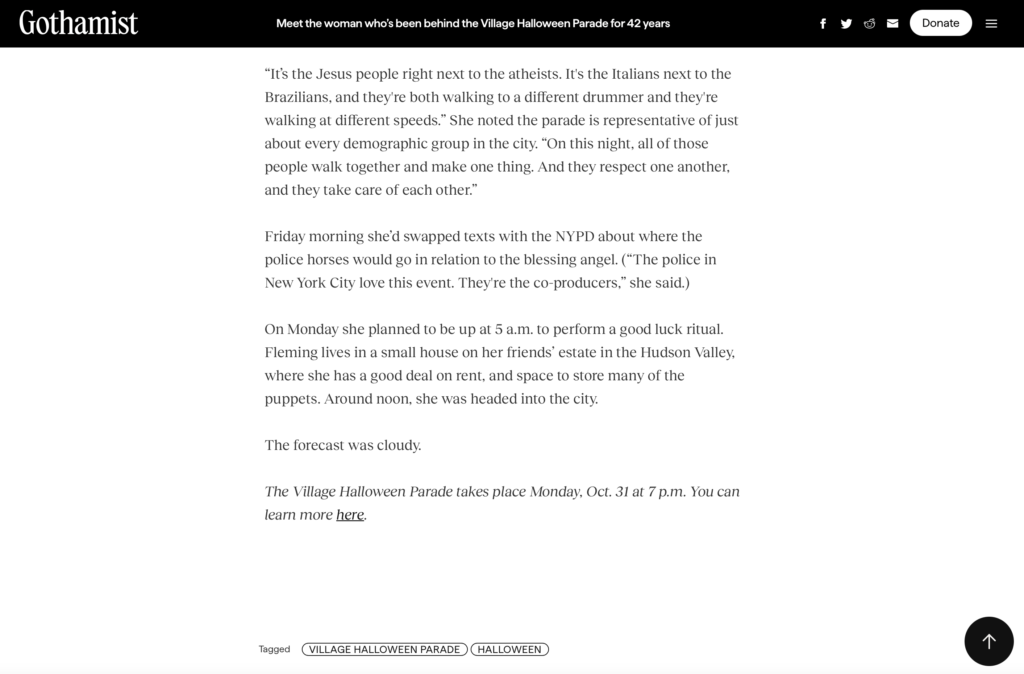 Since August, Jeanne Fleming, who is 77, has been working 17-hour days to prepare for the Village Halloween Parade.

Fleming has been the artistic and producing director of the parade for the past 42 years. Though she plans other events, this is her life’s work, and it takes up the entire year.

The Village Halloween Parade, now in its 49th year, is an enormous undertaking: About 60,000 costumed revelers are expected to march Monday evening, and millions more will watch on TV or in person along Sixth Avenue. People travel from all over the globe to partake in the spectacle.

And it is a spectacle: There will be giant puppets, floats, horses, marching bands.

“I love everything about it,” said Joseph Alexander, director of the Edward Morgan Ballet, who has participated in the parade “on and off” for the past two decades. This year he’ll be roller-skating down the street, mixing ballet and club dancing, as the parade’s designated “blessing angel.”

Rebecca Makus carried a 14-foot tall, 40-pound, T-rex skeleton puppet in the parade for several years before moving to attend grad school. She described the night as “awesome.”

“It felt homemade, even when the quality was really high,” said Makus. “It felt like a small town came together to make something together.”

That cozy vibe is by design. Jeanne Fleming thinks deeply, very deeply, about the parade. To hear her describe the night, it’s akin to a primal scream, on an individual and citywide level. Sure, Fleming hopes that partying in the streets can help people forget themselves for a few hours. But she also thinks about the parade as a chance to “move energy in a bigger way” – essentially, to change the world – one prancing, costumed New Yorker at a time.

The idea that art can transform lives is not theoretical to Fleming. In her early 30s, she was struggling with a deep depression. What pulled her out, she said, was working with the Bread and Puppet Theater.

And so, part of why she puts long days into planning these parades, year after year, on a shoestring budget, is to provide space for others to be creative.

Fleming can recall parades better than most people remember their own birthdays.

The 2001 parade, held just weeks after 9/11, was difficult but magnificent: “When we started the parade, you literally could hear a pin drop. People weren’t breathing,” she said.

Her voice cracked when she recalled the moment the band played “New York, New York” as a dirge, first slow, then faster.

“You literally could hear the crowds starting to breathe. And then they started to laugh and cheer,” she said. “You could feel the city coming to life.”

One of her biggest fears, always, is rain.

Fleming said it has only rained once in her tenure: during the 1990 parade, when she was pregnant with her son. “I thought, this is the baptism. I’m just getting water thrown at me.”

Fleming said this year’s parade has been the hardest of all. And it’s not just because of the pandemic, though that did make everything and everyone a little slower. (The parade was canceled in 2020, and resumed last year.) The malaise she’s describing goes deeper.

“Things are so out of balance in the world,” she said, rattling off a list of worries she’s heard from talking to people in planning this event: Putin, nuclear war, healthcare, COVID-19, inflation, disinformation.

She said people are very ready to partake in the parade, with its theme of “freedom.”

Fleming speaks lovingly about the participants and insists they’re respectful, despite the fact that they’re packed elbow-to-elbow onto city streets.

She said the parade is a unifying force.

“It’s the Jesus people right next to the atheists. It’s the Italians next to the Brazilians, and they’re both walking to a different drummer and they’re walking at different speeds.” She noted the parade is representative of just about every demographic group in the city. “On this night, all of those people walk together and make one thing. And they respect one another, and they take care of each other.”

Friday morning she’d swapped texts with the NYPD about where the police horses would go in relation to the blessing angel. (“The police in New York City love this event. They’re the co-producers,” she said.)

On Monday she planned to be up at 5 a.m. to perform a good luck ritual. Fleming lives in a small house on her friends’ estate in the Hudson Valley, where she has a good deal on rent, and space to store many of the puppets. Around noon, she was headed into the city.

The forecast was cloudy. 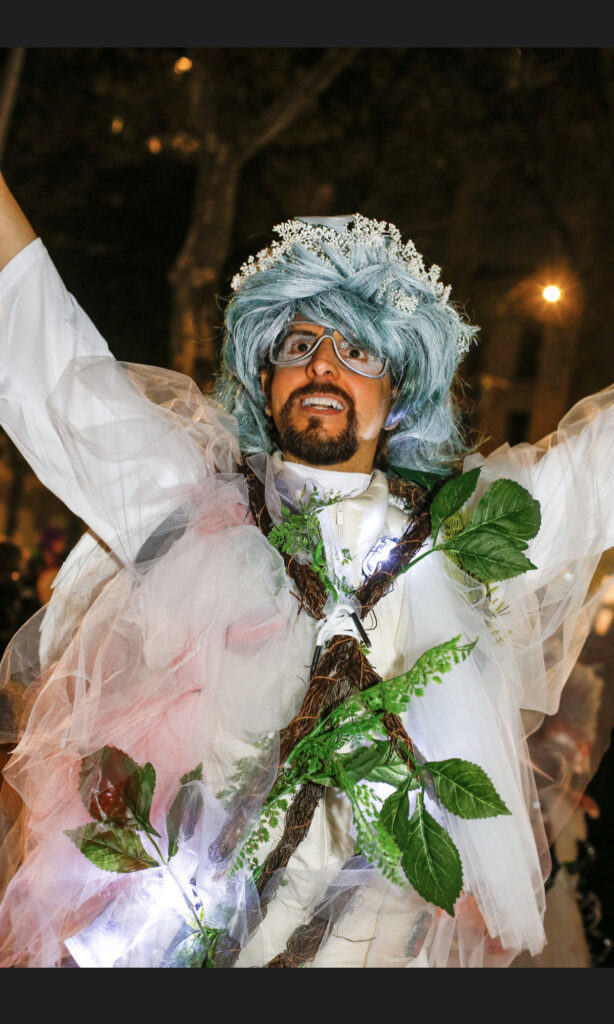