So Ms. d’Addario had him use a different name for the choreography of his ballet. She explained to Edward, “sometimes you have to do these things to protect yourself.”

Also, for your information, please note that Edward Morgan was
the first black director in the history of the Joffrey Ballet. 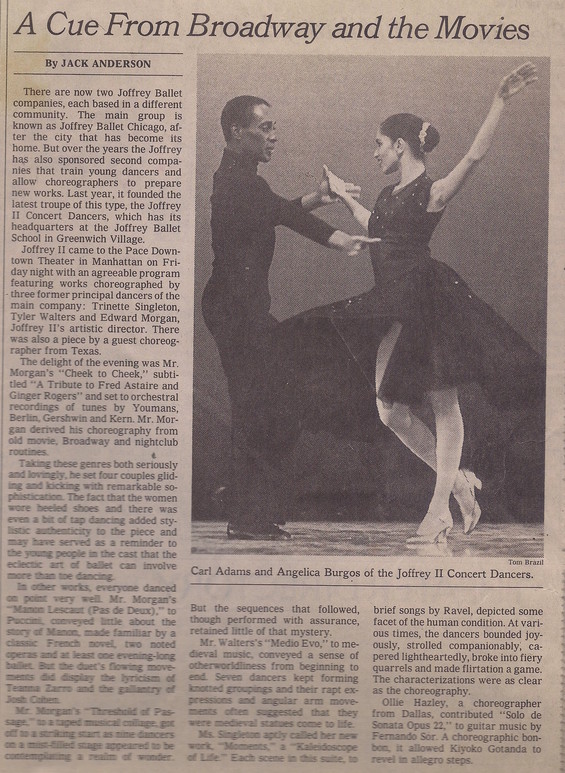 There are now two Joffrey Ballet companies, each based in a different community. The main group is known as Joffrey Ballet Chicago, after the city that has become its home. But over the years the Joffrey has also sponsored second companies that train young dancers and allow choreographers to prepare new works. Last year, it founded the latest troupe of this type, the Joffrey II Concert Dancers, which has its headquarters at the Joffrey Ballet School in Greenwich Village.

Joffrey II came to the Pace Downtown Theater on Friday night with an agreeable program featuring works choreographed by three former principal dancers of the main company: Trinette Singleton, Tyler Walters and Edward Morgan, Joffrey II’s artistic director. There was also a piece by a guest choreographer from Texas.

The delight of the evening was Mr. Morgan’s ”Cheek to Cheek,” subtitled ”A Tribute to Fred Astaire and Ginger Rogers” and set to orchestral recordings of tunes by Youmans, Berlin, Gershwin and Kern. Mr. Morgan derived his choreography from old movie, Broadway and nightclub routines.

Taking these genres both seriously and lovingly, he set four couples gliding and kicking with remarkable sophistication. The facts that the women wore heeled shoes and there was even a bit of tap dancing added stylistic authenticity to the piece and may have served as a reminder to the young people in the cast that the eclectic art of ballet can involve more than toe dancing.

In other works, everyone danced on point very well. Mr. Morgan’s ”Manon Lescaut (Pas de Deux),” to Puccini, conveyed little about the story of Manon, made familiar by a classic French novel, two noted operas and at least one evening-long ballet. But the duet’s flowing movements did display the lyricism of Teanna Zarro and the gallantry of Josh Cohen.

Mr. Morgan’s ”Threshold of Passage,” to a taped musical collage, got off to a striking start as nine dancers on a mist-filled stage appeared to be contemplating a realm of wonder. But the sequences that followed, though performed with assurance, retained little of that mystery.

Mr. Walters’s ”Medio Evo,” to medieval music, conveyed a sense of otherworldliness from beginning to end. Seven dancers kept forming knotted groupings and their rapt expressions and angular arm movements often suggested that they were medieval statues come to life.

Ms. Singleton aptly called her new work, ”Moments,” a ”Kaleidoscope of Life.” Each scene in this suite, to brief songs by Ravel, depicted some facet of the human condition. At various times, the dancers bounded joyously, strolled companionably, capered lightheartedly, broke into fiery quarrels and made flirtation a game. The characterizations were as clear as the choreography.