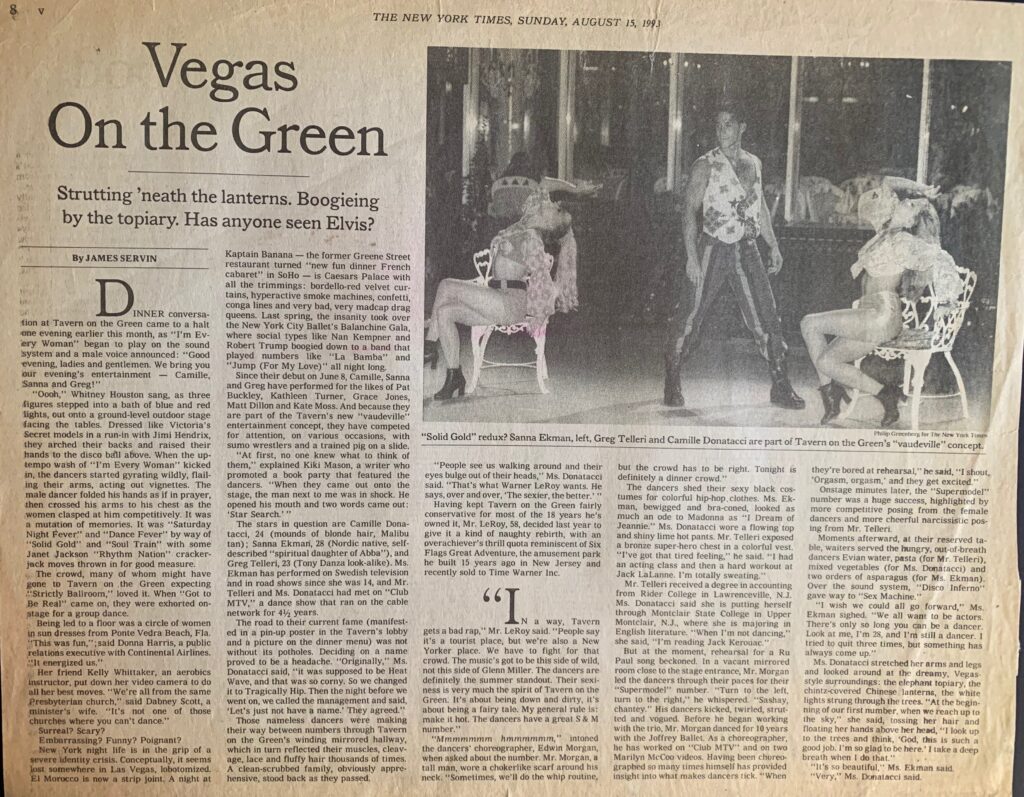 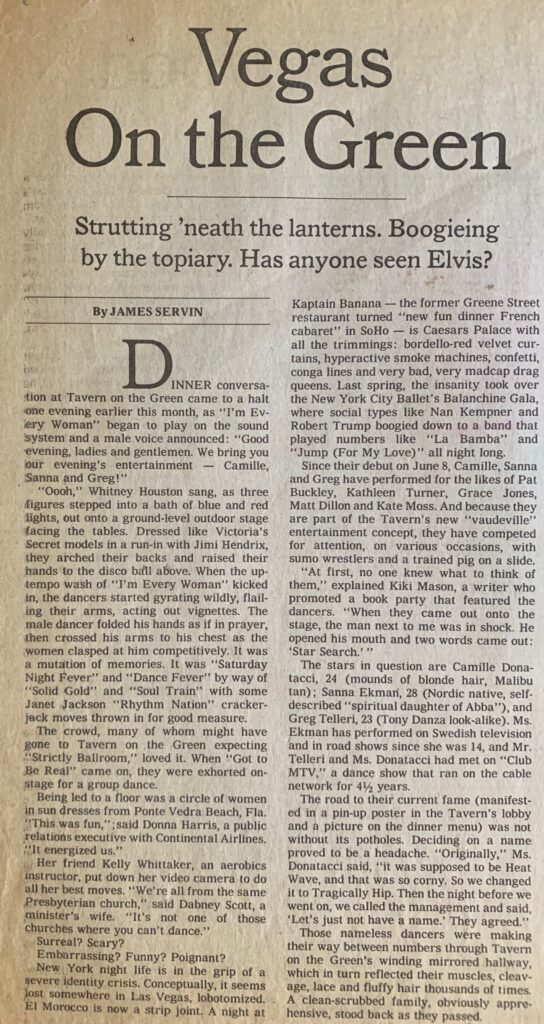 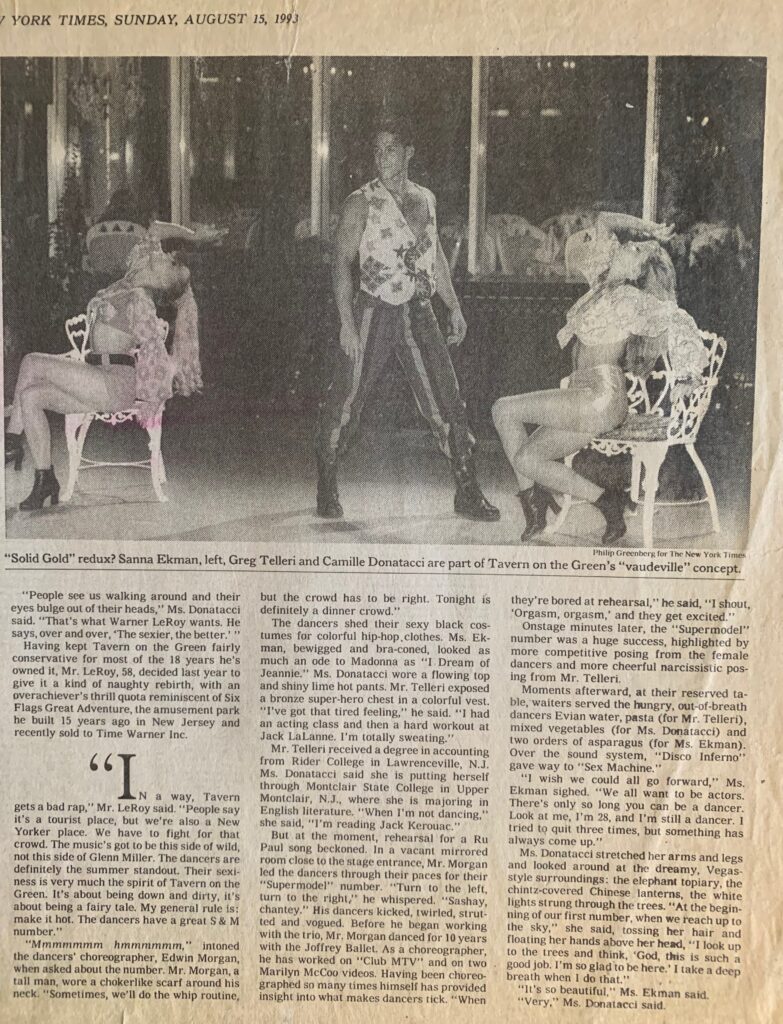 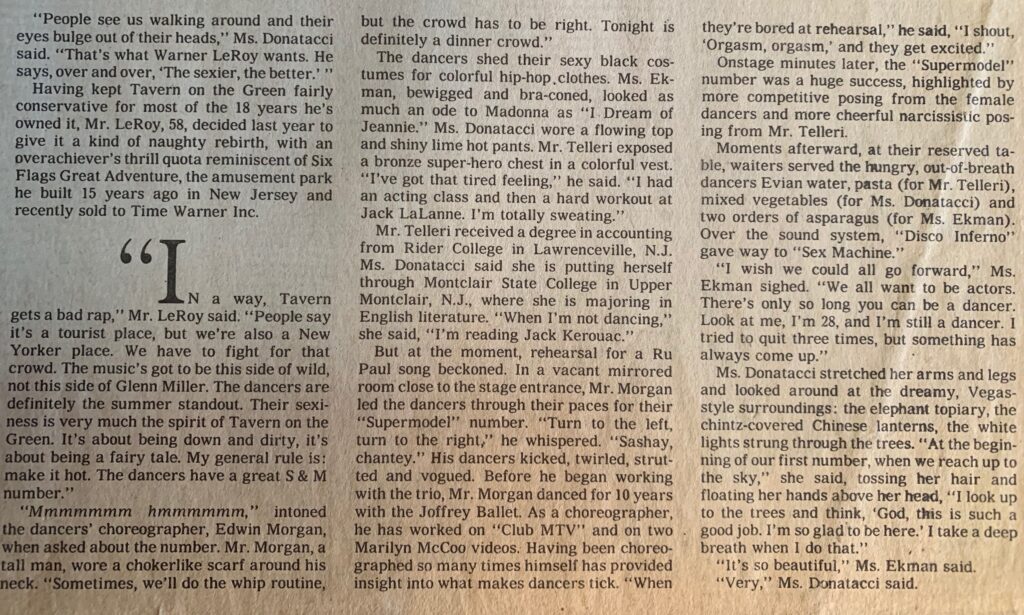 DINNER conversation at Tavern on the Green came to a halt one evening earlier this month, as “I’m Every Woman” began to play on the sound system and a male voice announced: “Good evening, ladies and gentlemen. We bring you our evening’s entertainment — Camille, Sanna and Greg!”

“Oooh,” Whitney Houston sang, as three figures stepped into a bath of blue and red lights, out onto a ground-level outdoor stage facing the tables. Dressed like Victoria’s Secret models in a run-in with Jimi Hendrix, they arched their backs and raised their hands to the disco ball above. When the up-tempo wash of “I’m Every Woman” kicked in, the dancers started gyrating wildly, flailing their arms, acting out vignettes. The male dancer folded his hands as if in prayer, then crossed his arms to his chest as the women clasped at him competitively. It was a mutation of memories. It was “Saturday Night Fever” and “Dance Fever” by way of “Solid Gold” and “Soul Train” with some Janet Jackson “Rhythm Nation” crackerjack moves thrown in for good measure.

The crowd, many of whom might have gone to Tavern on the Green expecting “Strictly Ballroom,” loved it. When “Got to Be Real” came on, they were exhorted onstage for a group dance.

Being led to a floor was a circle of women in sun dresses from Ponte Vedra Beach, Fla. “This was fun,”;said Donna Harris, a public relations executive with Continental Airlines. “It energized us.”

Her friend Kelly Whittaker, an aerobics instructor, put down her video camera to do all her best moves. “We’re all from the same Presbyterian church,” said Dabney Scott, a minister’s wife. “It’s not one of those churches where you can’t dance.”

Since their debut on June 8, Camille, Sanna and Greg have performed for the likes of Pat Buckley, Kathleen Turner, Grace Jones, Matt Dillon and Kate Moss. And because they are part of the Tavern’s new “vaudeville” entertainment concept, they have competed for attention, on various occasions, with sumo wrestlers and a trained pig on a slide.

“At first, no one knew what to think of them,” explained Kiki Mason, a writer who promoted a book party that featured the dancers. “When they came out onto the stage, the man next to me was in shock. He opened his mouth and two words came out: ‘Star Search.’ “

The stars in question are Camille Donatacci, 24 (mounds of blonde hair, Malibu tan); Sanna Ekman, 28 (Nordic native, self-described “spiritual daughter of Abba”), and Greg Telleri, 23 (Tony Danza look-alike). Ms. Ekman has performed on Swedish television and in road shows since she was 14, and Mr. Telleri and Ms. Donatacci had met on “Club MTV,” a dance show that ran on the cable network for 4 1/2 years.

The road to their current fame (manifested in a pin-up poster in the Tavern’s lobby and a picture on the dinner menu) was not without its potholes. Deciding on a name proved to be a headache. “Originally,” Ms. Donatacci said, “it was supposed to be Heat Wave, and that was so corny. So we changed it to Tragically Hip. Then the night before we went on, we called the management and said, ‘Let’s just not have a name.’ They agreed.”

Those nameless dancers were making their way between numbers through Tavern on the Green’s winding mirrored hallway, which in turn reflected their muscles, cleavage, lace and fluffy hair thousands of times. A clean-scrubbed family, obviously apprehensive, stood back as they passed.

“People see us walking around and their eyes bulge out of their heads,” Ms. Donatacci said. “That’s what Warner LeRoy wants. He says, over and over, ‘The sexier, the better.’ “

Having kept Tavern on the Green fairly conservative for most of the 18 years he’s owned it, Mr. LeRoy, 58, decided last year to give it a kind of naughty rebirth, with an overachiever’s thrill quota reminiscent of Six Flags Great Adventure, the amusement park he built 15 years ago in New Jersey and recently sold to Time Warner Inc.

“IN a way, Tavern gets a bad rap,” Mr. LeRoy said. “People say it’s a tourist place, but we’re also a New Yorker place. We have to fight for that crowd. The music’s got to be this side of wild, not this side of Glenn Miller. The dancers are definitely the summer standout. Their sexiness is very much the spirit of Tavern on the Green. It’s about being down and dirty, it’s about being a fairy tale. My general rule is: make it hot. The dancers have a great S & M number.”

“Mmmmmmm hmmmmmm,” intoned the dancers’ choreographer, Edwin Morgan, when asked about the number. Mr. Morgan, a tall man, wore a chokerlike scarf around his neck. “Sometimes, we’ll do the whip routine, but the crowd has to be right. Tonight is definitely a dinner crowd.”

The dancers shed their sexy black costumes for colorful hip-hop clothes. Ms. Ekman, bewigged and bra-coned, looked as much an ode to Madonna as “I Dream of Jeannie.” Ms. Donatacci wore a flowing top and shiny lime hot pants. Mr. Telleri exposed a bronze super-hero chest in a colorful vest. “I’ve got that tired feeling,” he said. “I had an acting class and then a hard workout at Jack LaLanne. I’m totally sweating.”

Mr. Telleri received a degree in accounting from Rider College in Lawrenceville, N.J. Ms. Donatacci said she is putting herself through Montclair State College in Upper Montclair, N.J., where she is majoring in English literature. “When I’m not dancing,” she said, “I’m reading Jack Kerouac.”

But at the moment, rehearsal for a Ru Paul song beckoned. In a vacant mirrored room close to the stage entrance, Mr. Morgan led the dancers through their paces for their “Supermodel” number. “Turn to the left, turn to the right,” he whispered. “Sashay, chantey.” His dancers kicked, twirled, strutted and vogued. Before he began working with the trio, Mr. Morgan danced for 10 years with the Joffrey Ballet. As a choreographer, he has worked on “Club MTV” and on two Marilyn McCoo videos. Having been choreographed so many times himself has provided insight into what makes dancers tick. “When they’re bored at rehearsal,” he said, “I shout, ‘Orgasm, orgasm,’ and they get excited.”

“I wish we could all go forward,” Ms. Ekman sighed. “We all want to be actors. There’s only so long you can be a dancer. Look at me, I’m 28, and I’m still a dancer. I tried to quit three times, but something has always come up.”

Ms. Donatacci stretched her arms and legs and looked around at the dreamy, Vegas-style surroundings: the elephant topiary, the chintz-covered Chinese lanterns, the white lights strung through the trees. “At the beginning of our first number, when we reach up to the sky,” she said, tossing her hair and floating her hands above her head, “I look up to the trees and think, ‘God, this is such a good job. I’m so glad to be here.’ I take a deep breath when I do that.”